Hey everyone! I have Midworlder, Heath, from Maggie Mundy’s latest paranormal romance, SCARRED PROTECTOR, on my blog today! He’s talking about his love for Evie and Frederic Chopin. 😀 Check it out and learn more about his story below!

Well, hello there, Heath! Can you tell us a little about yourself?

I’m a Midworlder or you would call me an alien. I am a half breed so I cannot live on my world anymore. I look like any regular human but I have wings. I can live a long time but it has its drawbacks. You watch those you love, die. I was born in the 1800’s in England and Evie says I remind her of Mr. Darcy, except with wings.

An alien, neat! I always wanted to be an alien. 😉 Tell us about your work.

I protect the Angelics attached to humans. You call them guardian angels but they are the pureblood form of my species. They absorb the energy from the human they are linked to, but can only be on Earth in an ethereal form. The Demonics have their own Midworlders too. You guessed it; we fight each other to keep the status quo.

Fascinating and very similar to our beliefs of angels and demons! If you had a day to do anything you wanted, what would you do?

I would spend it with the woman I love, Evie. I like to take her on my motorbike. She screams and holds on tight when I go fast.

I love me some motorbikes! Favorite alcoholic beverage (and not before you go on a motorbike, mind you :P)?

I like fine wines though I am starting to get a taste for rum since I met Evie.

Maybe mix them both, see what happens? 😉 How about your favorite music?

I like classical music especially Frederic Chopin. His Nocturnes are haunting and beautiful. I have lived long but have never learned an instrument. Maybe it is something I might do in the future.

You should! Why the heck not? What do you love most about Evie?

She is feisty and loyal. Evie has suffered so much but would do whatever she could to help others. She swears a lot but I am getting used to it. In fact it’s starting to rub off on me to the surprise of the members of my Enclave. She also has the most magnificent breasts.

Ha! Lucky girl. 😉 Before the story began, what were your hopes for the future?

I had none. I was unable to save my first love long ago. I wanted to die but the powers on Homeworld would not allow me to. I fight Demonics and do my job well, but my life was empty.

Evie came into my life and turned it upside down.

Sounds like it was in a good way! Looks like our time is running out…thanks so much for stopping by, Heath. 😀 Any parting thoughts?

Never give up. Just when you think you have nothing to live for, fate will throw you a lifeline.

Well said and so very true! Want to learn more about Heath and Evie? Check out their novel, SCARRED PROTECTOR:

Angels and demons are not what you think. They are aliens, and the Midworlders are their representatives on Earth. An Angelic Midworlder called Heath goes to the aid of Evie who is about to be attacked by Demonics. He soon discovers she can see the angels and demons around her and is in grave danger. He is captivated by Evie who has physical and mental scars like him. They are tortured souls who are deeply connected by his past. There is an evil lurking inside Evie that could kill them both.

Heath stopped ascending into the sky and hovered and allowed himself a moment of reflection as he gazed down at her face. What was going on here? She cradled against his chest and he had to admit he liked the sensation. He didn’t touch people unless he had to and had forgotten what it felt like to have a human pressed against you. It brought out protectiveness in him.

Her reached up and touched her cheek with his fingertips. The glow was gone from around her body, but the tingle still remained. She felt warm, too warm, as if she was running a fever. He moved his hand away surprised at himself. He never let his emotions show and yet he felt drawn to this strange woman with the wet and bedraggled fuzzy hair. It must have been the jolt of lightening affecting him. She looked so vulnerable and yet he had seen her be tough against Charles. She hadn’t known what she was taking on but she had fought well. He didn’t know her but he liked her feistiness. It was irrelevant. He needed to stop these pointless contemplations and concentrate on saving her. 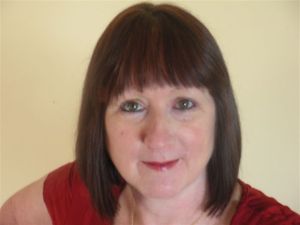 Maggie Mundy lives in Adelaide, Australia and is a member of Romance Writers of Australia, and the local chapter SARA (South Australian Romance Authors). She recently completed a Bachelor of Arts in Drama, English and Creative Writing at Flinders University. She had a short story published in the RWA Topaz Anthology Little Gems in 2010 called Sea and Vines. She has four books out with Rogue Phoenix Press. Two erotic novellas called Blood Scent and Blood Oath and paranormal romances called World Change and World Apart. She also has a supernatural thriller with Soul Mate Publishing called Hidden Mortality and a paranormal romance called Unknown Protector.

She has also performed for many years in corporate entertainment for which she wrote her own sketches, which probably explains why her head is so full of characters. She loves writing romance but thinks falling in love can be scary.

Where to find her: