RELEASING THE DEMONS is FREE on Amazon for a limited time!

It’s almost release day for VERMILION LIES, but I wanted to share my surprise freebie with you all! RELEASING THE DEMONS, the first book in my Order of the Senary series, is FREE from April 13-15 on Amazon. 😀

He’s out to set the world on fire.

She’s the only one who can tame him. 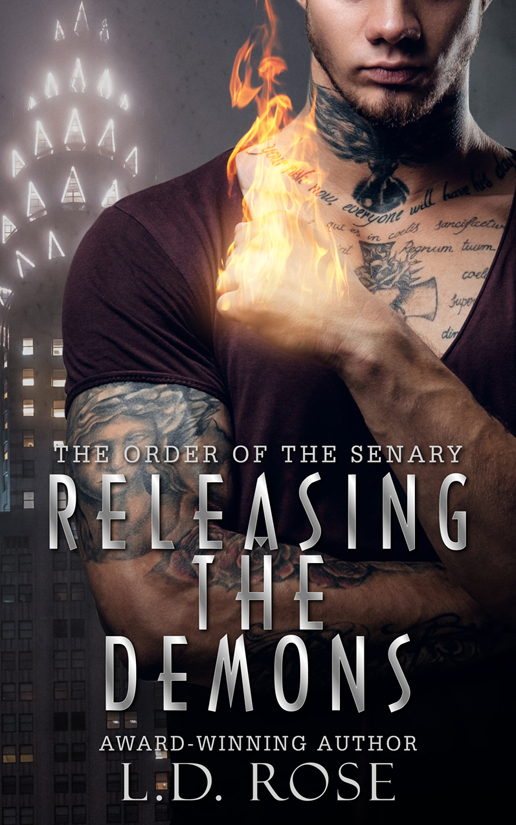 Five years after being maimed and tortured by vampires, Blaze is still picking up the pieces of his shattered life. As a genetically engineered hybrid mercenary, his mission is to protect what’s left of humanity. When his tormentors return to the Bronx gunning for Blaze’s blood, he’s forced to face the demons of his past. Hell-bent on revenge, he seeks the help of Valerie Medeiros, an NYPD detective who manages to steal his heart and save his life in more ways than one.

Motivated by her sister’s gruesome death, Valerie’s life goal is to bury every vampire in the ground where they belong. She has a hard time trusting anything with fangs, yet she falls headlong into Blaze’s life, a life full of darkness and horror she can’t even begin to fathom. The bodies are stacking up, but Valerie can’t let go of this hybrid, a beautiful monster filled with pain, rage, and passion unlike anything she’s ever known.

In a world where the line between good and evil is blurred, Blaze and Valerie will find danger at every turn, risking everything they’ve come to know and love, including one another.

“This exciting post-apocalyptic paranormal thriller produces shock and awe like no other. This is one blazing-hot read that shouldn’t be missed!” – InD’tale Magazine

“L.D. Rose’s vision of a shattered Manhattan where humans and vampires wage war every night is eerily real for a fantasy novel. A must read.” – The Romance Reviews

“Emotional and action-packed, it will have you anxiously turning pages.” – Uncaged Book Reviews

His body hardened, his heart thudding in his chest. If that wasn’t enough, the stirring low in his belly sure as hell was.

He wanted her. Badly.

And so did the leech inside him.

“Blaze?” She peered at him with concern, taking a step closer.

He snapped out of it, realizing she’d asked him something he completely missed. “Huh?”

“Do you want some coffee? Something to drink? Eat?”

Yeah, you. He swallowed his saliva, straightening. “I should get going.”

“Oh.” She tried to hide her disappointment but she was bad at it. She wants you to stay. “Where are you heading?”

“Probably home for a few hours. Rest up a bit.” And drink about a gallon of blood while thinking of you. “You know.”

Valerie set what he assumed was the bag of coffee on the counter. She took another step toward him as a wave of jasmine swept over him, tugging him in places he shouldn’t be tugged.

He took a reflexive step back. Goddamn it, he was fine. He’d been fine right up until now. What the hell just happened?

Bad idea, Blaze. Bad fucking idea to starve yourself and walk into her apartment at dusk, with that body, and that face, and those eyes, and that smell . . .

She looked entirely confused as he turned away and headed for the door. Christ, he was acting like he’d never been in a woman’s apartment before, and God knew he’d been in many. But he’d never been this hungry around a woman before—at least, not in ordinary circumstances. And he wasn’t famous for his control.

He could feel it, that ugly darkness inside him spreading through his veins, making his lips and toes tingle. The leech opened its jaws and yawned, sucking down what was left of his civility. His gums tightened, squeezing his canines, urging them to grow, to elongate.

He needed to get out. Now.

“I’ll see you in the morning,” he ground out, his voice a near growl. “Good night, Val.”

He slammed the door behind him and managed to stagger ten paces down the hall before his limbs stopped working. Sweat dripped down the sides of his face and trickled down his spine. His hands shook and he clenched them into fists. He stood there, chest heaving, heart pounding, fangs pulsing, cock throbbing. He closed his eyes and lifted his face toward the ceiling, trying to wrestle the monster down, trying to beat it back into submission.

But it was already too late.

Through the din in his head, Blaze heard a door click behind him, disengaging from its frame. It creaked open slowly as jasmine slithered through the hallway toward him, rising up and striking at his senses, delivering the final blow. He craned his neck and spotted her.

Valerie’s blond hair fell in a curtain as she peeked out, looking for him. Her eyes widened when she found him, still standing in the corridor, and she quickly retreated.

“Sorry,” she murmured, but before she could close the door, he was already there, his hand propped against it.

She looked at him in pleasant surprise. “Blaze, I—”

He didn’t give her a chance to finish. He seized her mouth with his before he slammed the door behind him and locked it shut. 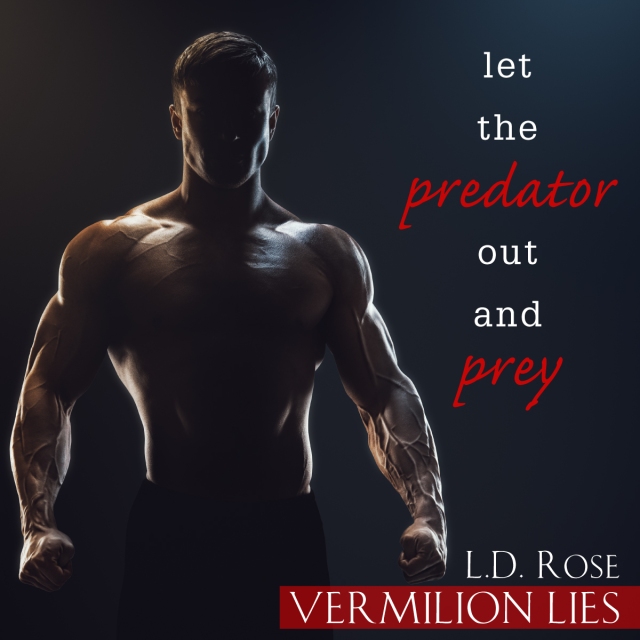 What readers are saying…

The passion and love between Dax and Cindel are intense. You will ache and burn for them. They will leave you breathless. I devoured it and I’m already craving a reread. Out of this world! – Veronica, BellaOrev Books

Vermilion Lies left me reeling and has ruined me for all other vampire themed books. If you’re looking for a super fast paced, gut punching novel, this is the one for you. – Aleen, The Lampshade Reader

L.D. Rose has a gift for storytelling that brings fantasy to life with a gritty flare that is both dark and sinister and engaging and addictive. This is one of the most mesmerizing, adult paranormal series I have read in a while with characters that are vibrantly colored and real to the imagination! – Dianne, Tome Tender Book Blog

Release day is April 17th and I CAN’T WAIT! Stay tuned for more teasers and an excerpt reveal! ❤